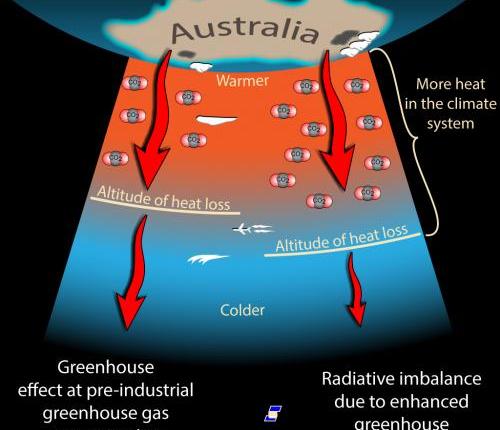 I showed the picture above in the previous lesson and discussed how water vapour absorbs a very broad set of wavelengths in the thermal infrared (and a few in the near infrared). This absorption is due to how the light of those wavelengths causes the water molecules to change their vibrational modes in lots and lots of different ways.

The carbon dioxide molecule has three atoms arranged in a straight line: a carbon atom in the middle and two oxygen atoms either side. It doesn’t have quite as many ways of vibrating as water, but it has quite a few – and crucially different ones (pink in the diagram above), so it absorbs thermal infrared at wavelengths that water vapour cannot respond to. Thus, carbon dioxide removes even more wavelengths that the Earth can use to cool down in outgoing radiation.

In the last lesson, I also described the water feedback loops – simplistically if there’s too much water vapour in the atmosphere it rains. More completely, a higher temperature means both more water vapour in the atmosphere as hot air holds more water – creating more heating – and it means more clouds which may either accelerate warming (trapping heat in at night), or slow down warming (reflecting more sunlight in the day time) – but we’re not quite sure which.

We are increasing the amount of carbon dioxide in the atmosphere (we’ll come back to the evidence for that later – but basically, for most of the last ten thousand years there were 250-280 carbon dioxide molecules in a million air molecules and now there are 400). And there isn’t a feedback loop as simple and immediate as “rain” to get rid of it. There are ways it can naturally come out of the atmosphere: the main ones are increased plant growth (eg in rainforests) and increased ocean algae. The oceans can also absorb some carbon dioxide, but that makes them more acidic which impacts marine life – particularly corals. Of course, if we’ve cut down the rainforests (which we really have) they can’t absorb as much carbon dioxide either.

Because I’m still taking about the basic physics, I want first to consider what the increased carbon dioxide (wherever it comes from) does.

Now you might think that’s easy – CO2 is a greenhouse gas so more CO2 means more warming; but that isn’t directly true. The atmosphere is very thick – so the thermal infrared meets lots of carbon dioxide molecules on the way up: that means that the atmosphere already absorbs all the light at some wavelengths (the ones where the graph above touches the top of the image). Increasing the concentration of carbon dioxide might make it be fully absorbed slightly earlier, but you can’t be more absorbed than fully absorbed (and at some wavelengths it only takes 25 metres of air to block the light completely).

Instead there are two important effects. The easier effect to understand is that not all infrared wavelengths are completely blocked by the atmosphere. In the last lesson I showed a graph of atmospheric absorption zoomed in and there you see lots and lots of thin lines. As the concentration of carbon dioxide in the atmosphere increases, some of those lines get broader, and some of them get deeper. For example, some wavelengths represent changes from an unusual vibrational mode to another, that are rarely “set up” – it’s rare for the light to meet a molecule in the right starting state, but when there are more carbon dioxide molecules, the light is more likely to find one of these rare molecule vibrational states, so those wavelengths are more frequently absorbed and the absorption line deepens.

Eek. Sorry. I could have over-simplified this: more CO2 means more greenhouse warming. But I want to try to explain the whole story as I understand it (I am not an expert on climate modelling, so there are still huge simplifications in here I don’t know about!)

One last point: water vapour and carbon dioxide are not the only greenhouse gases. Methane is another important one – with four hydrogen atoms round a carbon atom, it has a lot of vibrational modes – but there’s not as much of it in the atmosphere as there is carbon dioxide. It is also increasing. The refrigerants (HFCs, HCFCs, CFCs) don’t only damage the ozone layer (ozone has vibrational modes that block UV on the way in) but are also very potent greenhouse gases – partly because they don’t occur naturally so they absorb wavelengths nothing is absorbing already. There are currently very low levels of these, but if we don’t dispose of our old refrigerators and air conditioning units carefully we’ll release them into the atmosphere and because there is no absorption at these wavelengths already – a small increase makes a big difference. Just think about how many air conditioning units there are – and the human feedback loop: more warming, more air conditioning, more refrigerant gases, more warming… (that’s why Project Drawdown puts disposing of refrigerant gases carefully as their number 1 activity for solving climate change problems).

The image above shows the “absorption spectra” of H2O (water – in blue) and CO2 (carbon dioxide – in pink). The absorption is because light (electromagnetic radiation) at each wavelength causes the water or carbon dioxide molecules to change their vibration from one way of vibrating to another. Because water has so many different ways of vibrating, a very large number of wavelengths are absorbed. You can see that the edges are “jagged” – actually, if you zoom in on any one part of the spectrum, you can see that it’s actually made up of lots and lots of lines.

The top image has a wavelength scale in microns (micrometres – 1000 times bigger than the nanometres I’ve used so far). The sun’s spectrum is in the wavelength range from 0.3 microns to around 3 microns. The Earth’s thermal infrared emission spectrum is from 4 microns to 40 microns.

The dominant greenhouse gas is water vapour. Water vapour absorbs more infrared radiation than any other gas because of the many, many different ways the molecule can vibrate. And because that radiation (light) is absorbed, it doesn’t get released into space and the Earth has to heat up to maintain a thermal balance between the incoming solar radiation and the outgoing thermal infrared radiation.

So, what would happen if all 7.5 billion of us boiled a kettle and released water vapour into the atmosphere simultaneously? Well, the simple answer is – it would rain. The atmosphere can only hold so much water (the exact amount depends on temperature and pressure) and when it’s exceeded, the water condenses into clouds and, eventually, rain. The water cycle is a very complex, but also very rapid feedback loop. The exception would be if we boiled those kettles in the upper atmosphere. There it is harder to make clouds, and the extra water vapour creates significant increased warming. This is one of the problems with aeroplanes – they are not only creating carbon dioxide, but also releasing water vapour into the high levels of the atmosphere.

The aeroplane effect is more complex still – aeroplanes burn fuel and the by-products are carbon dioxide, water vapour and nitrous oxides – all greenhouse gases. Emitting water at high altitude creates increased warming – but this, too, eventually falls as rain. The carbon dioxide has a much longer lifetime. If we all stopped flying, the water vapour would disperse quickly – the carbon dioxide would stay around for decades. Note that if we powered our planes with hydrogen, they would still emit water. (See also: this Guardian article from 2010). Of course, planes also make contrails – which means more clouds (see comments below about clouds).

However, hotter air can hold more water than colder air. So if the air temperature increases (for whatever reason), there is more water vapour in the atmosphere, which in turn leads to more “greenhouse effect” heating. This is known as a “positive feedback” – positive in the sense that it makes the effect bigger, rather than that it’s a good thing!

We don’t have a lot of global records of water vapour levels, so it’s hard to put precise numbers on the amount of water vapour in the atmosphere and how that’s changing with time. But there are indications from spot measurements (where it’s been measured in one place for a long time) that water vapour is increasing as the atmospheric temperature increases.

Of course, increased water vapour also leads to more clouds and we’re still not completely sure what more clouds means for the climate. On the one hand, more clouds means more sunlight is reflected – reducing the incoming energy and therefore cooling the Earth. On the other hand, more clouds means that more heat is held in at night (we all know clear nights are the coldest), therefore heating the Earth. For clouds at high altitudes we know that the keeping heat in is the bigger effect (positive feedback), for clouds at low altitudes, reflecting sunlight is a bigger effect (negative feedback). Overall, there’s a lot of uncertainty in what we understand about both the positive and the negative feedback mechanisms. The latest IPCC report concluded that the positive feedback was likely to be more significant than the negative feedback – but it’s still not clear by how much. “Cloud feedback” is the biggest uncertainty in climate models (and better satellite data is needed to improve our understanding of it). The climate modellers have been predicting that doubling the carbon dioxide will change the Earth’s temperature by “something between 1.5 ºC and 4 ºC”. The reason they give a range is almost entirely due to our lack of  – almost all of that range is caused by our lack of understanding of cloud feedback. As we improve our understanding of clouds, we’ll reduce that range (and recent studies suggest the lower end of that range was too optimistic). 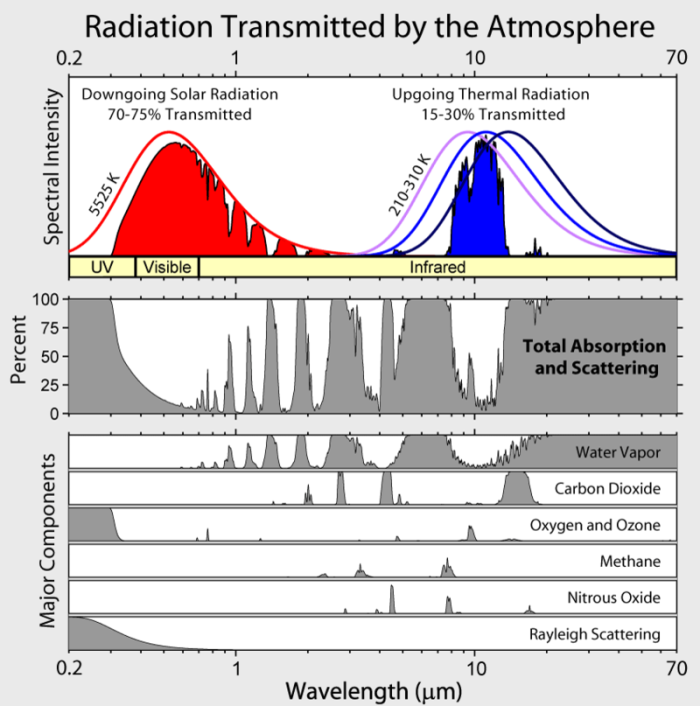 This image comes from the Wikipedia article on the greenhouse effect.

The red bit is the sunlight coming down. The drawn line is roughly what’s at the top of the atmosphere (there is some loss because of Fraunhofer lines, but basically it’s a perfect blackbody) and the coloured in red bit is what reaches the Earth’s surface. The missing wavelengths are absorbed – and you can see below why:

The blue and purple lines are what the Earth would emit at different Earth temperatures (the one most to the left is for a blackbody at 310 K – or about 35 ºC – the one furthest right for temperatures around 210 K – or about -63 ºC). The solid blue bit is the only bit that gets through the atmosphere. All other wavelengths are absorbed by water molecules (“water vapor” plot) or by carbon dioxide or other greenhouse gases.

The diagram is drawn for a normalised blackbody curve – so you can see the thermal infrared one and the solar one on the same picture. In reality the solar one would be much “higher” as well – and the blue ones would not only shift left with higher temperatures, but also get taller.

Because so much of the output spectrum is absorbed, the Earth will heat up until it’s output is equal to its input: it needs to be at a hotter temperature for the energy in the coloured in blue bit to be equal to the area under the whole curve at a lower temperature.

This is known as the ‘greenhouse effect’ – but that’s actually a poor name. Yes, there is some real “greenhouse effect” in a greenhouse: the sunlight gets through the glass, but the thermal radiative energy of the surfaces in the greenhouse, emitting thermal infrared radiation, can’t get back out again … but actually the main reason real greenhouses warm up is that hot air can’t escape… ah well!